Hanyang University symbol mark is the basis for University Identity System, and is the representative symbol of visual image of Hanyang University, both internally and externally. Symbols been developed to ensure the unity of the visual images, so it requires special attention to its usage in order to deliver consistent image of the university. 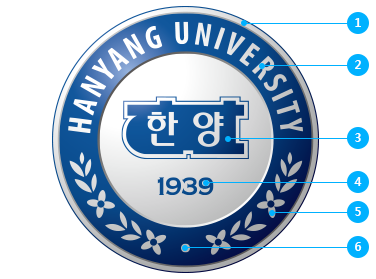 Hanyangians’ determination and resolve toward globalization is symbolized by modernizing and simplifying the former emblem shape.

Hanyang is blazing toward the world and the future by its innovate and globalization spirit.

The original font used for ‘Hanyang’ (한양) is preserved within the outline of the character ‘Han’ (한) to signify Hanyang’s enduring spirit and unwavering foundation since the university’s induction.

The year of Hanyang’s origin 1939 is incorporated to reflect its proud history and tradition rooted in the foundation of the university’s philosophy.

Forsythia, decorating the lower half of the emblem, represents Hanyang’s ability to persevere even in harsh and unfavorable conditions to signal the coming of spring. Hanyang’s progressive spirit will work toward bringing a warmer and brighter future for all.

The spirit and will of Hanyang University is gathered into one.

The secondary version of Hanyang University Symbol Mark is designed to be exclusively used for media that requires simplified representation of symbol mark. In order to represent constant image in various media, distortions in shape and color is restricted when it comes to its usage 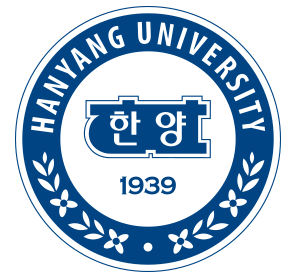 This ‘Initial Logo’ is a symbol that can be used to effectively promote Hanyang’s image. Initial logo has friendly and active image apart from Basic UI that represents Hanyang’s tradition and vision. It is usually utilized in school events including university festival.